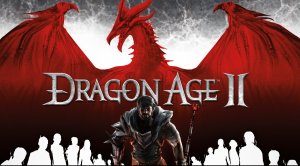 So, last year at Comic Con, one of the things I missed was Dragon Age and the chance to have a play on it. In fact, I skipped the computer games entirely because my main focus was going was to watch TV and film panels.

This year is slightly different and I’m trying to correct mistakes, so, when I had a gap in my ‘schedule’ I decided to leave the Convention Center and check out Dragon Age II.  In fact, as I walked across the road away from the Convention I was even handed a ‘come play Dragon Age II’ postcard, so even serendipity was on my side. I kind of ignored the fact there was also Dead Space 2 in the same location, so sorry about that folks – it’s not my cup of tea so I didn’t pay it too much attention (though I did get an inflatable weapon from them also!).

Ah yes, the inflatable sword swag – something I brought home from last year. They had inflatable swords advertising Dragon Age and I assumed this was just leftover stock, so I grabbed another couple – but these are branded Dragon Age II, so they just must know how much we all loved them. In addition, there were some blood splatter tattoos advertising the game, and showing a good sense of humour about one of the things people (myself included) mocked about the original game.

I should say now, don’t expect any pictures of the game or gameplay – we signed enough of an NDA to cover that, but I did specifically ask about blogs and twitter and that’s all fine, I mean, they obviously want us to spread the word. There was a queue to get in to Dragon Age II, and no queue for Dead Space 2. Make of that what you will. 12 people were let into a room at a time to get some hands-on experience, plus a couple who could stand around and watch, which is the option I took, since I just wanted to SEE the game.

We were treated to a little overview first, explaining some of the main changes and how they’d all come from customer feedback from the first game. The graphics are sharper and use a slightly different style (I thought this would be fairly minor, but when you see the game in action it is genuinely a lot more beautiful!). Fighting is punchier and looks a hell of a lot more responsive – mages now have a cool death blow animation equivalent to jumping up and stabbing things in slow-mo, blood is less ridiculous but still flies around a lot, and some of the spell and fighting effects are just gorgeous – we saw a warrior and mage taking on some hurlocks and an ogre, each showing off their special attacks.

There’s a couple of big differences which I think will prove quite interesting, but obviously which we can’t really see in a short playtest. First of all, the hero is voiced! No more silence. Apparently, this is going to avoid situations such as a silent response to diatribe in a Landsmeet, and the little clip we saw of it was great, but it’s still a very hard one to judge. But, they do have it so you’re not just repeating a dialogue option, the options paraphrase what your char will actually say. Oh, and while we’re on dialogue options, they now have icons next to them that give you a hint how they might affect things (it looks like there are only a handful of icons to get used to though, and I quite like the idea).

Secondly, the narrative structure of the game has changed. The game covers a much longer period than Dragon Age, and is told by a couple of (not necessarily reliable) narrators – the tale of The Champion (that’s you, that is!) and who s/he was. This allows Bioware, and the player to play key points in the life of the character, with each being able to have a massive influence on the rest of the story. Your character escapes Lothering and heads north, and you know becomes The Champion of their new locale (Kirkwall, or something with Kirk in, anyway – sorry, this is all from memory). And the world is on the brink of war by the end of the time period being discussed. So you get to see how this Champion became who they are. I was dubious, but I quite like the idea now. Bioware said it helped them actually show a longer and more fulfilling timescale, and avoided things like an epilogue that just told you what happened years later, now we’ll be able to play so many flashback sessions that we get to see our character’s full story.

The section of playable game was chosen to show off some of the fighting and a little of the dialogue, but it was pretty short. I thought it definitely looked like the combat flowed more and I liked what I heard of the voices and what I saw of the new art style. In fact, there really wasn’t much I didn’t like about the changes and I’m now really looking forward to playing the game, due out in Spring next year – in perfect time for my birthday!

5 thoughts on “Return of the Inflatable Sword”