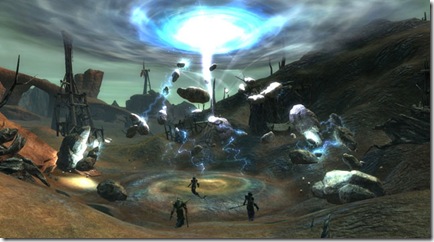 How time flies when you’re having fun in betas. Before you know it, tomorrow is head start day for Rift and even though I’m run off my feet at the moment with flu (which sucks, don’t get it!) and various other games such as the Darkspore beta and Tuesday night Spreadsheet-Pirates I have been getting increasingly excited to play Rift over the various betas.

I respect bloggers like Tipa’s decision to avoid beta so that everything is new at release, but at the same time it has helped me to decide which souls I love and to get to know some of the people in my Rift guild, mostly made up of friends from LOTRO and twitter. (Incidentally, I disagree wholeheartedly with Ravious on the faction coolness factor on the grounds that … Defiants get to ride robo-mechanical-horses. It doesn’t get cooler than that!)

I was getting very confused over classes and souls until I decided to just try and remake a class I’d enjoyed from a different game. In DaoC, my sorceress was a master of AE Crowd Control, used lots of dots and lifetaps, could charm pets and had a run speed buff.

I ditched the pet idea instantly because I never really liked being stuck with a pet and started a new character as a Dominator/ Warlock. Suddenly it clicked. What I’m finding now is that I love the Warlock so I’ll use that as primary/ secondary in some kind of dps build and then maybe add Chloromancer/ Warlock as a main healer build. That still leaves the possibility of a heavy CC build for PvP.

In many ways, ‘choosing’ a character is wrong word for Rift character generation. Designing a character would be closer to how it works in practice.

I’m not sure why I am so hooked on casters in this game, but I have been enjoying it in beta immensely. Arb has been through far worse torment on deciding on a class and soul combo and I know she’s not the only one.

One thing I have noticed is that Trion has actually put a fair amount of content in the game for explorers. There are artifacts to collect and puzzles to solve in each zone. But you have to wonder what the point is when Rift Junkies has guides up to all the puzzles already …

Do you prefer to know this sort of information in advance to make sure that you don’t accidentally miss anything, or do you prefer to find it out (possibly alongside your guild)?

17 thoughts on “And … let’s talk about choosing characters in Rift!”