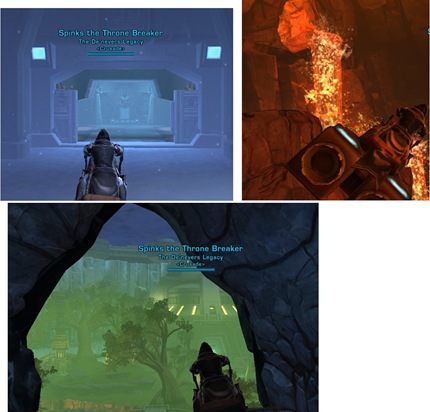 It must be telling that although we spent a few hours in the Eternity Vault over the weekend in an 8 man group, all my screenshots show Spinks sitting on a speeder.

This is because Bioware have introduced the most amazing raid functionality known to man (or to lazy raiders, alternatively) – a speeder where you zone in which will neatly zoom you through the instance and drop you off somewhere near the last group wipe. This pretty much blew my mind. I don’t know if it’s because I’m profoundly lazy, or because I’ve spent too much of my life running through half cleared raid instances after a wipe. You will see from the screenshots that the Eternity Vault encompasses a bizarrely wide range of environments (snowy mountains, lava pit, jungle, and ancient mechanical vault.)

The speeder did once dump us (amusingly) in the middle of a spawn of mobs (manka cats) but otherwise was very well behaved.

Anyway, back to the raid. We now have about enough level 50s to be considering an 8-man group so decided to go take a poke at the Eternity Vault. In the event, we were one person short so we PUGged a healer (by dint of asking in general chat on the fleet).

And great fun was had by all. We didn’t quite get the last boss, as people were getting tired, but had several tries and I’m pretty sure we’ll get him next time now that everyone understands the fight. I’m going to bullet point some thoughts:

Final verdict: that was fun! Raiding in a chilled out group with friends is a particular type of MMO fun that’s hard to get in any other way. I remember now why I play these games.

And that’s the difference between well tuned encounters where even if you fail, you feel that you could do it next time, and some of the hard mode flashpoints where difficulty can be a bit all over the place and it’s never clear if it’s down to execution, nonoptimal group composition, lack of gear, or not understanding the fight.

Although SWTOR gives the impression of being an open world type of themepark MMO, that isn’t entirely true. Or rather, there are some planets which are mostly open world and you could run into the other faction (if you went looking for them), and others which are not.

This is because the Republic timeline doesn’t quite match up to the Empire timeline. Or rather, the two factions quest through some planets during slightly different eras. For example, Empire on Balmorra help to put down the resistance and install Darth Lachris as planetary governer. Republic get to Balmorra later in the timeline, and they help the resistance to overthrow the Empire and get to kill Darth Lachris (at least, I did on my consular).

The odd thing is that as Empire, you never hear about any of this. As far as my empire characters know, Lachris is still in charge and if I go back to Balmorra, I could go and visit her.

Similarly, Republic retake Corellia /after/ Empire have taken the planet in their storyline. And as Empire, you will never hear about this (presumably it hasn’t happened yet?)

This means that from a RP point of view, it’s very difficult to figure out what the actual state of play is politically at endgame. I think the Republic view is the more current one and that they’re actually making good headway by the game’s (current) end. But playing as Empire, you would actually think the opposite. In a true open world game, needless to say, you could go back to those Republic held planets and actually try to re-install the Empire if you wanted to do so.

But in this type of game, you have to wait for someone to write a storyline about it. Just an interesting genre effect to think about.

15 thoughts on “[SWTOR] In which we raid, and in which factional timelines confuse me”