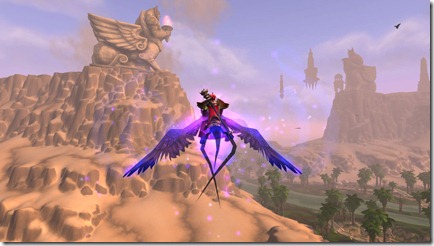 Will the last alt through Uldum please turn off the light…?

So at the tail end of another expansion, thoughts turn to two things: finishing up anything you wanted to do in the current expansion while it is still current and populated, and getting the alt industrial complex ready for the expansion that is to come.

I feel that coming back after a few months break, there’s no point in having a weighty bucket list. Presumably if there were loads of things you wanted to do in the game, you would have stayed in the game longer and done them. There is also a notion of ‘unfinished business’ – any raids you haven’t completed and still want to see, any achievements in the current expansion you might want to do, and so on.

So I was excited, and grateful,  to be able to take Spinks through Firelands with my guild, since we had been struggling with it when I was last subscribed. This time, unsurprisingly, we whipped through it all fairly fast including some heroic modes, I got a new axe from Shannox, and we killed Ragnaros (or whatever you do to giant fire elemental lords). Job done.

I do feel a sense of closure on Cataclysm raiding, despite having seen so little of the Dragon Soul. I’ve never really been that up for killing Deathwing and … sometimes a raid simply doesn’t appeal. The other reason I’ve been slacking on seeing the latest content in guild raids is that I don’t really feel good about whipping through content that other people have worked hard to get on farm. I know it will sound odd, but the whole experience of raiding (in my head) is about going in, wiping, people getting frustrated, getting better, first kill, and then finally onto farm status. And the last reason is that I’d feel bad if someone who had been raiding all year had to sit out so that I could raid.

I also had a chance to practice my shiny new 5.01 tanking spec in Icecrown when we took a raid there to snaffle some achievements. It is, for a start, very nostalgic to tank a raid that you have tanked many times before albeit a couple of years ago. Although it is a different experience when the level 85 zerg does the whole ‘knife through butter’ number on Arthas. Mostly what I remember is the tension that all the raid tanks felt at the time, that we were in competition with each other for raid spots. That caused far more anxiety than the actual raids themselves, even though I’m pretty sure raid leadership wondered why we were all so wound up all the time.

So I guess as well as finishing out my Cataclysm raiding (with some old raids), I’ve started to get my confidence back for group work in WoW. We’ll call that a win.

I am finding the current Prot/Fury setup for warriors to be serviceable, but I’m not sure if it is more fun than the previous version. Active mitigation seems to mostly consist of deciding whether to hit shield barrier or shield block once there’s enough rage in the bank, with penalties (in terms of damage taken) if your twitch reflexes are below par. It would be nice if the UI could make this more prominent, as I suspect healers will end up catching the flak for tanks dying due to failing to mitigate unless it’s really obvious that it isn’t their fault.

Of the alts I have tried under the new system, it’s the priest who I’m really liking at the moment. Shadow is shaping up to be a strong, fluid spec at the moment; it has a different rotation for burst damage than for longer fights which I like and you can glyph to be able to throw a few emergency heals too.  I healed a few heroics with Disc spec and that seemed fine, I’ll look forwards to experimenting with it further. I did also check out my druid and I think Balance is going to be quite unwieldy due to the sheer number of keys you need to bind for the main spells and all the various utility spells you get as a druid. But bonus points to Blizzard for including a glyph that means you don’t need to be in moonkin form all the time.

The other bucket list items for me were levelling fishing and archaeology on at least one alt. Fortunately (for my sanity) Blizzard have made both of these a bit less onerous in the last patch. Archaeology also would drive me bonkers after awhile – possibly why I hadn’t bothered with it much previously – it’s the most Facebook of the WoW minigames and involves lots of clicking and random rewards. There are hints of lore behind the found items but really this thing needs a full codex style interpretation with extensive entries for each item, which WoW conspicuously does not provide.

Out with the old, on with the new

Sometimes, seeking closure and preparing for a new expansion can be done at the same time. I wanted to level a couple of alts from 80 to 85 (one for crafting reasons, the other because I was just enjoying playing it) which gave me a chance to see the Cataclysm levelling zones again. Mostly I agree with my first impressions – the levelling game has a lot of good, fun content in it if you don’t mind sitting down to enjoy the ride. I still love Vash’jir as a zone, and still hate Uldum. It’s a shame about Uldum, such a beautiful zone that begs to be explored and all you get is a halfhearted ‘help these people retake their city’ and ‘be a sidekick to Indiana Jones’ questlines; the latter is ALMOST worthwhile just for all the puns but not quite.

With the upcoming pet battles, I found a new interest in acquiring pets. I’ve never been much of a collector so there several I hadn’t bothered to pick up from faction vendors even though I could. I also went through all my alts to figure out which of them still had any Argent Tournament tokens, to see if I could pick up any pets from those vendors. Turned out a couple of them did, yay.  As always, if you pick the low hanging fruit and aren’t a completionist, you can be fairly laid back about WoW and still feel that you’ve accomplished something in game.

And the other thing I wanted to do was hang out and reacquaint myself with my guildies. It’s been awhile, there are new faces as well as old one, and I feel there’s an unspoken stigma about being a quitter that you can only really overcome by demonstrating that you’re actually around. I am sure that a lot of people are playing both GW2 and WoW at the moment, and that MoP will sell millions (as per every WoW expansion). It will be interesting to see if it grabs people more than Cataclysm did. I do think there is a chance that it might, but Blizzard are now going against the flow with their subscription game so we’ll see how that hits the numbers.

Next week brings the new Theramore scenario, which will be the first sight a lot of players (including me) will have of the new 3-man instances, if instances is the right word. And now that I’m pretty much done with closure and have figured out how to play my character post-patch, I am looking forwards to it.

Do you do anything to get a sense of closure at the end of an expansion, or before leaving a game?

8 thoughts on “[WoW] Patch 5.01 redux, and getting closure on Cataclysm”