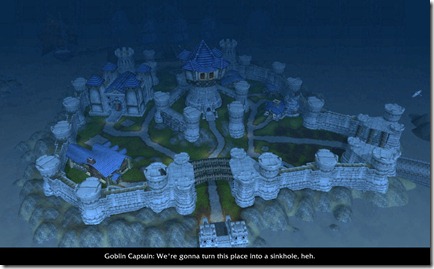 Well I thought the scenario was quite fun!

One of the features added to WoW in the next expansion will be scenarios: short 3-man escapades which are designed to be manageable without a balanced group, by characters without raid gear.  We know this because WoW developers addressed this question in a Q&A last night.

The fact is that Scenarios in Mists will be more tailored for players in quest gear and dungeon blues.

The Fall of Theramore was released early and tweaked for level 85 characters (in rather better than quest gear) to give people a preview of scenarios with one that is related to stuff that happens in the lore between the end of Cataclysm and the beginning of MoP. You can queue randomly for a PUG, although I guess waiting times are longish because people were also calling for groups in general chat.

In this particular scenario, your current goal pops up on the right of the screen and you’re guided from encounter to encounter, with patrols and suchlike to avoid/kill on the way. The storytelling works fine on a micro level, you always know what  your next objective is even if you don’t really know why. Clearly (as Horde) you are doing destructive things in Theramore, and eventually rescue a snotty Blood Elf spy – I don’t know why we didn’t just leave him there either. On a macro level, the storytelling isn’t a failure so much as completely nonexistent. Even a paragraph of text on the LFG screen would have helped.

Unsurprisingly, this is a widespread complaint. Blizzard also addressed it in the Q&A (different site from above because this is the full transcript).

Guest-37: The story of Tides of War is really interesting. I don’t think players can get engaged if they have no idea what’s happening, the bomb dropping is really anticlimactic. I felt a bit disappointed so little got included in the scenario. Was this because of lack of time, of developers or because you rather keep all that info in the novels.
DaveKosak: To Guest-37 I’ve been watching the Theramore feedback closely, and this comment seems pretty universal. We tried to keep everything all in the scenario, to make it really self-contained, but not burden it with lots of story that you have to slog through every time you played the scenario. It’s pretty clear from the feedback that people wanted more story. We should’ve surrounded the scenarios with more quests or explanations to help round out the story for the people who wanted to know what exactly was happening. Lesson learned!

It looks as though the developers heard all the complaints about the long preambles in lore heavy instances like Old Stratholme and decided to just skip it and let players get on with the random devastation. But I bet most people really quite liked the preamble the first time they saw it. They might have liked it even more if they had first seen the preamble in a solo instance with plenty of time to listen, explore, or just spacebar through it if they really have no patience.

LOTRO, I think, had the best solution to this with respect to their skirmishes (similar to scenarios but better, at least based on what I have seen atm). A LOTRO skirmish is a shortish (20-30 mins) scenario which scales up from solo to 6 player groups, some involve defending a location (such as Weathertop or The Prancing Pony Inn in Bree) from waves of attackers, others involve heading into an enemy held location and freeing it by capturing one goal at a time.  Where skirmishes were introduced into the game, some were immediately available and others had to be unlocked by completing the (mostly soloable) epic questline in which they played a part. Only after you had finished the quests did you realise that you had just completed the one man version of the skirmish as part of the storyline. So players knew all the background to the skirmish and had familiarised themselves with the layout and goals BEFORE being able to queue for random groups. I thought that was fairly genius, and it’s a shame WoW skipped that part.

As far as the actual storyline goes, Horde dropped The Bomb on Theramore (at the end of the scenario, when players are no longer at ground zero). It’s like we have our very own Hiroshima – naturally there was no exploration of any ethical implications. Which is fair I guess since players had so little to do with it all. Plus they’re only Alliance. You even get a miniature bomb memento in the mail afterwards. My goblin priest probably thinks it is the best thing ever.

So in that context, the only surprising thing is that it will take the Alliance an entire expansion to get round to invading Orgrimmar.

I am however, intrigued to see the other scenarios. I think we’ll really enjoy them at that sweet spot between reaching the level cap and zooming into heroics (a sweet spot which currently lasts about 2s but may be more drawn out in MoP.)

I ran through the scenario a couple of times on my shadow priest (who only just makes the gear requirements). Fun was had, we found the instructions clear and easy to follow, the boss fights aren’t very interesting but it was cool to be able to run around Theramore. I liked that the scenario didn’t feel like a long corridor with mobs in it, but more like an actual location. The challenge level felt fine with a random group of 3 dps. I can easily imagine that with a guild group involving some tanking and healing on the side, it would be trivial. And you get a loot bag at the end which may contain iLvL 384 shinies, or may not.

The first time one of the random people went AFK at the start and we weren’t able to boot him, and the other player was a resto shaman who kept telling me he was just there to heal. Needless to say, it didn’t go brilliantly well although we got about 2/3 of the way through before a mass unexpected pull just sapped my will to be there.

I can see why Blizzard might have thought it of lesser importance to implement a boot mechanic (to boot people from groups) in content that is only 8-`12 mins long, but they underestimated how dickish some players can be. Hopefully some ability to book afk people will be in sometime.

The second time I ran the scenario (same character), I had a  better feel for how it was intended to run. This time it was my shadow priest, a hunter, and a mage. It wasn’t hard but it was fun and we had to be on our toes. I threw some heals, there was crowd control, if the hunter had actually brought a tanking pet they could have tanked. I can see my spriest having a ton of fun in scenarios during MoP, there’s a real role for a dps who can throw clutch heals. I also got a shiny iLvL 384 healing staff in the reward box afterwards, and getting shinies always improves my mood (shallow, I know).