*sniff* Alas poor dwarf commoner heroine, I may have temporarily forgotten you but it all comes back to me now!

Any Dragon Age fans out there? Course there are! Dragon Age Inquisition is going to be taking up a lot of my time come this November –  like many others I will find my gaming time massively torn between DAI and the warcraft expansion. Bioware have thoughtfully released little cameos of the new companions so like any right minded person I have already been thinking which of them I plan to romance. #ridetheironbull But that’s for another blog post.  Suffice it to say I can’t really imagine even having this discussion about another game line or developer. Also if the ‘pinkification’ of games means more cool romances I’m all for it.

Dragon Age: The story so far

Dragon Age Keep is now in open beta. This is an official website where players can look through the stories of the last two Dragon Age games (Origins, and Dragon Age 2) and either upload records of the choices that they made in their own favourite game or tweak the main choices to get the background that they want for DAI. I can only assume this means that many of these choices will impact on conversations or interactions in the new game.

One of the things they have done that I really love is that after uploading the options taken in your game/s, which it does fairly smoothly, the Keep gives a brief animated run through of the story so far. There is a narration. You are also offered  the ability to change some of the key choices as they come up. I’ve shown this in the image at the top of the post. It’s really rather great.

Later on, you get the chance to edit the whole ‘tapestry’ by being able to dip into specific parts of the game and editing what you would like to have happened. Hey, it beats having to run through the Deep Roads again. 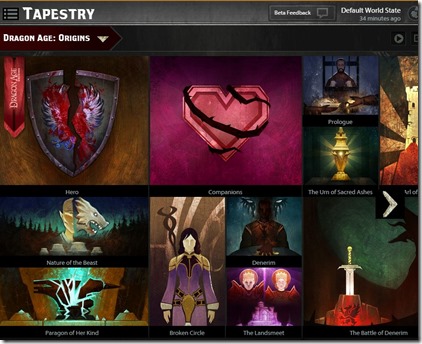 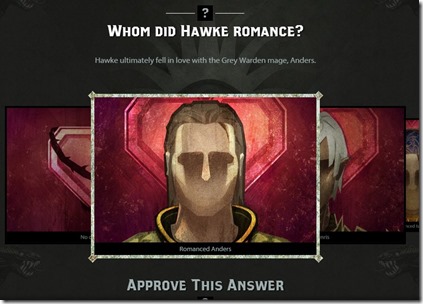 Alas poor Anders. Gone but not forgotten. No wait, apparently I didn’t actually kill him! I may be the only one

Does that mean he might make a cameo? Will Ser Pounce-a-Lot be with him? Roll on the 18th.