I am still enjoying my slow and rather casual explorations of Star Trek Online. No matter that the rest of my fleet were zooming around in their Tier 2 or 3 ships when we tried some fleet action last weekend, no matter if other people I know have almost reached the level cap, I’m still having fun pottering around in my little Miranda class starship.

One of the interesting things about trying a new MMO, and especially when you are used to something as heavily modded as WoW is that you can’t always rely on addons or quest helpers to let you fly by instrument. In fact, ironically because STO is one of the few settings where it would be totally in character to fly by instrument, I end up doing a lot of looking around me to find quest objectives and crafting nodes (I mean, space anomalies.)

For example, the screenshot above shows my ropey old starting cruiser heading towards an anomaly in space. 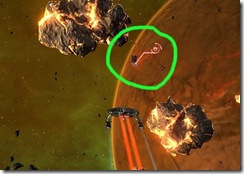 They’re really not hard to spot, but it feels like a reward for keeping your eyes peeled and actually looking at the world around you.

More than just scanning your minimap to find nodes.

I find this setup to be very immersive. I love to feel rewarded for paying attention to the game world, even if it’s just that I can spot the anomalies quickly. I also enjoy that an automatic map or addon won’t do this for me. There is a breakpoint at which it gets frustrating to be looking at a screen of wallpaper trying to spot the little dots which are your quest mobs (this reminds me of pouring dutifully over my little sister’s photos of a cricket match she once saw where she was so far away from the action that all you could see were tiny white dots on a big green field). But despite that, there’s still some fun to be had from spotting things for yourself, even if the game falls over itself to make it easy.

In PvP of course, looking around you is not so much a neat bonus as a way of life. You must pay attention to the surroundings. In high end raiding, the same applies. And of course, shooter style gameplay is all about looking around you, targeting, figuring out how to use cover, and so on.

For example, STO makes it very easy to justify why your character is taking orders from the Federation, and all the missions do actually explain why you are helping with Federation goals. There’s nothing that involves a random quest dude asking you to kill ten rats, it’s all wrapped in more plausible character motivation than that.

In Wrath, I have no doubt at all why my character wants to kill the Lich King (something that was notably lacking in earlier expansions.) And if MMO gameplay is moving towards a twitcher, more shooter style, perhaps that’s also more immersive in its way.

Of course, none of this means that gameworlds can’t have convincing weather patterns, geography, and ecosystem. I like to think that maybe it’s just a matter of time before the different types of immersion all synch up.