I pre-ordered my copy of Cataclysm a few months ago, so the boxes should hopefully be arriving today. As a result, I wasn’t actually online at midnight with the digital download crowd.

It didn’t matter. The excitement was off the scale last night and it was fun to be part of it. For some reason on my server when there’s new content due out, loads of people like to go stand on top of the quest givers to obstruct other people. They started to pile on top of the flight master in Orgrimmar at least 2 hours before the expansion actually went live. You have to admire that sort of dedication.

One thing this launch does mark is the end of the long (very long) blogging road from the last big WoW patch, which is when Icecrown Citadel was released, until today. For most of that time, those of us who weren’t in the Cataclysm beta had very little new high level stuff to write about.

This was the point at which the beta players were able to churn out maps and guides and information for a thirsty audience. And they did, in vast numbers. People ran out and bought Cataclysm related domain names purely on the strength of that beta invite (I’m not linking because it’s tedious over-commercialised levelling guide stuff, but understand that there is an actual business advantage to be gained from having priority access to the content).

And everyone else was writing about what our cats did that week, or the WoW equivalent. Now for me, being shut out of the new content means the blog posts start to get a little random. I hope it’s been an interesting ride, it certainly challenges me to get my head together. And it means that when my copy does arrive, I’ll come to the new content fresh and hopefully it’ll be bug free.

In any case, I’d especially like to thank all the other bloggers who didn’t have beta access (particularly if you focus on WoW) for hanging in there through the dry patch. There’s no in game achievement for that kind of dedication but that’s partly the point.

Incidentally, when I logged in this morning, one of my guildies noted that he’d seen level 84s on the server already. I suspect they will be raiding by tonight. (For comparison, as I write this, the expansion doesn’t go live on the US servers for another hour.)

There is also a discussion thread on mmo-champion about the world first 85 (yes of course someone hit max level already).

So how big is Cataclysm exactly?

We know that previous WoW expansions have been amongst the biggest PC sellers of the years when they were released. And there’s no reason to think that Cataclysm will be any different.

But this year there is a difference, Blizzard offered a digital download option and it’s likely that a lot of players will have taken them up on it. So how will we get the overall sales numbers? That’s going to be an interesting news story to look out for this week, especially if Cataclysm doesn’t hit the top of the sales lists for retail sales (although I suspect it probably will as well.)

And lastly, what do you do when Deathwing comes? 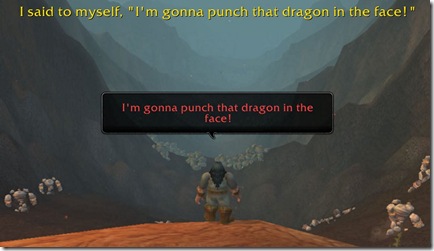 (Picture from ‘The Day Deathwing Came’)

“Next you’re going to tell me that Deathwing is still alive and attacking the city”?

Nope, we’d never say that. Oh Elling Trias, you joker. We know you have some kind of a cheese related plan.

When Wrath was first announced and we knew for the first time that we would be able to go to Northrend and fight the Lich King, I had mixed reactions.

I was excited. He’s the most iconic villain in the piece. We’ve been fighting his minions since we were little level 1 nooblets. We want to see where that story ends.

I was surprised. They were really going to let us go and fight him? I had expected that as an endpiece to the whole game, a nugget to somehow spread out through a few more expansions first.

And I wondered … isn’t that the end of the game? What on earth could they do next? With Arthas gone, the whole game setting is going to feel diminished.

So I can see a few options:

So, a dragon based expansion. How could that work?

One of the few iconic bosses left in the game is Deathwing, the leader of the black dragon flight. So let’s cast him as the villain in the next phase of the game. And he’s going to destroy all the other dragon flights as part of his crazy masterplan.

What better reason to open dragons up as a new race for players?

Let’s  allow players to start at a higher level and in their own instanced starting area (similar to death knights). But let them pick any class they want. Maybe the class will influence which flight they belong to – greens for nature based, blues for arcane based, renegade blacks for shadow based, and anyone else can choose. Dragons in Warcraft can also assume humanoid form, so let’s handwave some lore to make each dragon decide in advance which form it prefers to use as humanoid. And as a neat bonus, this effectively opens up all classes to all races.

For example, currently only taurens and night elves can be druids. If green dragons could also be druids but could take any humanoid form, then all those people who were desperate to play gnomish druids would have a way to do it. Also, by introducing no new classes, there shouldn’t be any additional balance issues.

And because they are dragons, instead of buying flying mounts they’ll just shift into dragon form when they need to fly anywhere. Maybe just buy advanced flying skill from a dragon flight trainer instead of extra-fast mounts.

Then handwave some extra lore to say either that the player dragons need to either hide from Deathwing’s watchers or else that the Black Dragon Aspect has crippled natural draconic abilities – in either case, it can explain why the player dragons don’t just go dragon on raid bosses.

For possible raids, there are a couple of solid dragon-based locations and enemies that could easily be brought into play. One is Grim Batol, and the other is the Emerald Dream. Both cool, iconic locations which have been mentioned in game since very early on. Both canonically related to dragons.

That’s about as far as I got. What do you think? Would the lure of playing a dragon bring you back to WoW after the Lich King bites it?