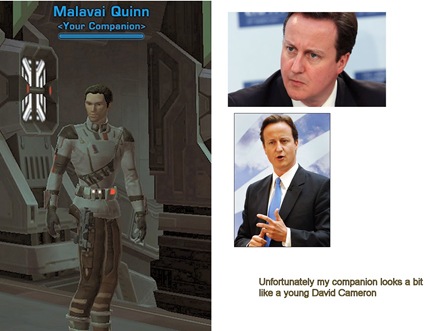 I’ve been playing a fair amount of SWTOR lately, and am unashamedly really enjoying the game. Particular high points so far have been:

If you are wondering where SWTOR puts its screenshots, check two things:

Is Crafting broken in SWTOR?

Here is the current issue with SWTOR crafting: there is one gathering skill that makes money as if it was going out of fashion, with no associated risk. It is Slicing. If you just want to make money and don’t care about making stuff, take Slicing as one of your crew skills and send all your companions off to find lockboxes all of the time. You will eventually make good bank.

It’s not that all the other craft skills are bad. Cybertech and Biochem in particular can make plenty of things that people will buy. I’ve made enough from Biochem (I can sell implants as fast as I can make them, nothing else really sells so far) to buy my speeder training et al so it’s not by any means bad, but you have to work at it. They just probably won’t make as much as you would from Slicing because you have to acquire materials and then take the risk that a) other people won’t buy your stuff from the auction house or b) competition will drive prices down so that you won’t make much of a profit.

Armormech, Synthweaving, Armsmech and Artificing all make plenty of nice gear that is at least as good as anything you will find elsewhere. But there is competition from quest rewards, PvP gear, and drops from flashpoints.

At the end of the day, it’s the lack of risk in Slicing – it’s guaranteed money – which makes it so unbalanced.

It will also be interesting to see the effects of Slicing on the market. There are fewer people crafting to sell on the AH at the moment because the game is new out, and lots of people take gathering skills (incl. Slicing) as they level. But the prices they sell at are set by the Slicers since they have most money to spend on the AH.