This is a barbarian warrior with her natural weaponry, a massive 2 handed flaming axe.  (If you are already bored of the D3 posts fear not, this is likely to be the last for awhile.)

What I love about this screenshot is that even after being zoomed in a few times, you can see the attention to detail in the graphics. Her fingers even close around the axe haft as if she’s taking the weight and stands ready to swing it at something (probably a demon), and when you think how small the character models are in D3, that is a lot of attention to detail. It’s also far better graphically than WoW, where I’m sure my warrior’s skeletal fingers did not always close around the weapon she was wielding.

I’m currently on Act 3 of Hell and my barbarian reached level 60 recently. The way difficulty works in D3 is that your character has two main attributes: damage and survivability. Your goal is to have enough survivability to stand toe to toe with monsters long enough to either kill them or land a few hits and then run off again. So I found I tended to swing between high survivability builds and high damage ones, depending on what type of gear I had available and whether I’d just switched up an Act. In a new Act (or difficulty) typically you have to raise your survivability as a priority before you can start focussing on bringing the damage up to match, otherwise you just die all the time. This is also a bit dull because chipping away at mobs slowly is not as exciting as big numbers and fast kills.

High enough damage will pretty much negate any combination of elite mob suffixes by the simple mechanic of CLICKCLICKDEAD.  Even those charming molten/vortex/firechains combos.

Hence my current 2 hander. Level 60- weapons with high damage are EXPENSIVE, going way beyond any interest I have in farming cash. Blue weapons, and particularly 2 handers, are far more affordable. With this setup I am barging my way nicely through Act 3 of Hell level and suspect I’ll be fine through Act 4 as well. The weapon made a big difference as I was getting bored of poking mobs politely with the equivalent of a knitting needle, at least they die fast now. I may not bother with Inferno.

The end game, such as it is, involves farming for gear or for gold to spend on gear in the auction house. If this is not of great interest to you, then really you might as well roll some alts, focus on achievements, or play with friends. (Or play something else.). There’s no special point having great gear unless you want to a) finish Inferno mode and/or b) farm more gear. I imagine the RMAH will see lots of use from people who do want to buy stacks of millions of gold so that they can buy high end weapons off the gold AH (expect galloping inflation at the top end once that comes online) but I’m honestly not sure I see the point. It’s not going to unlock new and brilliant gameplay or content. Meanwhile my blue 960dps 2 hander is perfectly good for Hell Level – better than good really – and cost me about 25k.

The other mechanic that helps you farm gear at level 60 is a buff called nephalem valour which only level 60 characters get. You get a stack of NV every time you kill a pack of elite mobs, it can stack up to 5 times, lasts 30 mins, and increases the chance that mobs will drop magic items. What was far more surprising to me is that NV doesn’t drop off when you die. I feel this goes against the whole ethos of roguelikes, but what do I know?

Ways in which I personally have made the game easier for myself so far:

The auction house is the greatest of all these difficulty changers, because of the effect higher dps and resilience has on the gameplay. The AH also makes it easier to try out offbeat builds – I had one going for a while where I took abilities that increased the chance of mobs dropping health globes and wore a lot of gear which gave extra health on using health globes. It actually worked quite well.

It’s hard for me to gauge the longevity of the game. It is fun. It is fun when playing with friends or random groups. It does not require much thought. So even if you don’t have the stomach for farming Inferno Level (which I don’t) it may continue to be a cheerful device for chatting to friends over a few dead demons.

The big issue with ‘endgame’ for D3 is that endgame for D2 was, frankly, tedious as all hell. It involved endless boss runs for loot. And they’ve sort of copied it but not exactly and with an auction house tacked on. The auction house effectively means that farming areas you are able to easily farm for magic items will never feel worthwhile (unless you are able to farm Act 3/4 Inferno). This was clearly not the intent, and players were probably intended to farm the areas they could manage until they got the occasional lucky gear up that would eventually let them progress. So I assume there are small chances of higher end loot dropping an Act before you’d actually need it.

But who is going to farm an area endlessly waiting for lucky drops if they can cash in and just buy something better instead? Someone with more willpower than me, for sure.

Instead, people will farm for gold, which is a lot easier and less random. But because it’s less random, it lacks the spikes of excitement that good loot drops provide. I think Blizzard could at least have tried to innovate an interesting item farming model. Let players unlock different areas in which to farm different items. Let them have more crafting drops to transmute existing items or rearrange their stats. Let them learn by trial and error which areas or mobs in the world are more likely to drop which types of items.

What patches will come?

Blizzard have a dev blog post up discussing Diablo 3. Interesting snippets are that 54% of hardcore players picked a female character (they don’t say what percentage of those are female demon hunters), and they’ve listed the most common runes used by level 60 characters, which include some head scratchers but what do I know?

They discuss their criteria for making tweaks and changes, including some of the nerfs that already came down the line.

Regarding the changes to Lingering Fog, Boon of Protection, and Force Armor: we determined these skills were simply more powerful than they should be, and we felt their impact on class balance and how each class was perceived warranted hotfixes as soon as we were able. However, we don’t want you to be worried that a hotfix nerf is lurking around the corner every day. If a skill is strong, but isn’t really breaking the game, we want you to have your fun. Part of the enjoyment of Diablo is finding those super-strong builds, and we want players to be excited to use something they discovered that feels overpowered

There is also some discussion around the difficulty of Inferno level and whether Legendary items are good enough or not. Of interest to anyone considering levelling up their blacksmith is also:

we’re looking to adjust the Blacksmith costs for training (gold and pages) and crafting from levels 1-59, and reduce the cost of combining gems so that it only requires two gems instead of three (up to Flawless Square). Both of these changes are scheduled for patch 1.0.3.

I think the main issue with Inferno (not having run it myself) is that the difficulty is similar to the difficulty in other tiers when you’re a bit undergeared. I remember thinking I was dying too quickly in Nightmare mode too until I hied me to the auction house. Just it’s much harder to overgear it at level 60. So really the problem with Inferno is not that it’s radically harder compared to the rest of the game, it’s that the difficulty is posed in exactly the same way as the rest of the game when endgame players might have preferred a more skill based challenge.

A few thoughts on where is easy to farm for cash/items/xp in the game.

The Frugal Gamer has some ideas for places to farm in Act I.

In Act 2, I farmed xp in the Black Soulstone quest (lots of pacey dungeons).

In Act 3, I like the Rakkis Crossing area just before Siegebreaker (Siegebreaker Quest) as you get Tyrael along with you.

Finally some words from our sponsor

I have far too much fun reading the companion chat, even if it’s not especially stunning in itself. 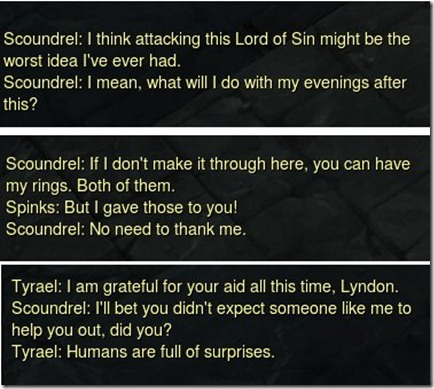 So, first content patch of the game has brought new flashpoint, operation (raid) stuff, class tweaks, and PvP tweaks and boy has the latter turned out to be a doozy.

There were tweaks made to the open world high level PvP zone on Ilum to encourage players to earn valor via killing other characters rather than just capturing objectives. However, the faction bases had not been given sufficient safe zones, add to that a population imbalance and what you end up with is one faction farming the other at the respawn point for eternity. And the respawning guys couldn’t get to their taxi/ escape point. MMOCrunch describes in more detail what’s been going down.

Bioware have apologised and are planning to patch it urgently. So basically PvP was messed up on Ilum for an evening, and there will be fixes. They also commented about noticing individuals who took ‘extreme advantage’ of the situation, but we’ve no idea what’s happening with that.

I find it hard to be up in arms about this since I’ve never even been to Ilum and although the game contains PvP, I don’t really consider SWTOR to be a PvP game. If they’d broken PvE I’d be mildly irritated though. However, PvP tweaks in a game really do need to be more carefully tested that this. It leaves the feeling that Ilum had been a problem when players were deliberately zone flipping so they put in a quick patch which has led to worse problems. I suspect they will eventually iterate on a fun/ workable solution, because open PvP zones can be fun and aren’t a bad idea.

As for players leaving en masse, it comes down to how much patience you want to have with a new MMO and team. I think the general lack of patience in the player base has been the doom of MMOs in general, but at the same time, a dev team needs to build the level of trust that means players will roll with a bad patch in the knowledge that it gets fixed. Bioware have not got off to the best of starts.

The important thing for me is a) how quickly they hotfix the problem and b) whether they can learn from the experience and avoid doing it again. The faction imbalance, however, is a whole other issue …