Finally after all those months of waiting, jousting, questing, clearing out necropoli, Old Gods and Dragon Aspects, our characters have had the chance they’ve all been waiting for to charge in against the Lich King head on.

And lo, it was good. In all the flurry of the dungeon finder excitement and people discussing minor strategic details and fretting over the difficulty and the bear butt rockets, it would be easy for a reader to miss the fact that the Icecrown Citadel is a fantastically cool and very fun raid instance.

None of the boss fights are clunkers, they’re certainly all good fun to tank, and the atmosphere, music and graphics are superb. Imagine that you’ve fought through Icecrown, using every trick in the book to set back the Lich King’s plans and finally arrived with the elite of the Horde army at the fortress itself. A siege engine (bringing fond memories of Warhammer) has done its work and the entrance is now open.

Inside, an eerie chill pervades the stone and metal halls. The crafters of the ebon blade and argent dawn have joined forces to set up a base camp for the assault. The leaders of both factions are present, and Tirion even gives one of his trademark dreadful pep talks as final checks are completed and we get ready for our first push. One of my goals this week is to get more screenshots to provide for a better travelogue.

Note: I’ve had bosses who gave pep talks like that. You know the sort where you feel worse after hearing it than you did before?

For now, here Spinks is sandwiched between two bears as we’re about to go pull the first boss. Feel free to criticise my UI (and I can’t remember why I had recount up either). 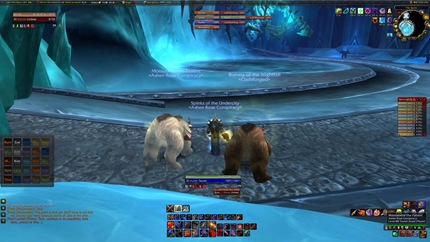 We’ve been raiding Icecrown every week apart from Christmas, and although Saurfang still hasn’t fallen to us, we’re had some good attempts and it’s just a matter of time. (Hopefully tonight, even.)

Even my death knight, still struggling with that new shiny badge armour smell, has been able to sneak into a pick up group to go farm some reputation in there. But bosses will die eventually, the main thing is … she’s in Icecrown too!

I’m finding that all of the Icecrown boss fights so far have been really fun to tank. When you play through this type of content, you remember that yes, Blizzard actually is that good at creating fun raid fights.

The key is that all the fights can use more than one tank (I hear that people do Lady Deathwhisper with a single tank in 10 man, as long as someone else can step up in phase 2 – maybe a feral switching to bear or death knight in frost presence.)

But truth be told, the raid fights are significantly more fun for us when several tanks are required. We enjoy working as a tanking team, and it feels like a reward for the fact we’ve played together all expansion and all trust each other.

Marrowgar – The main tank issue here is his saberlash mechanic. Saberlash, introduced back in Zul Aman, means that the boss has a large cleave attack where the damage is divided evenly between characters standing in front of him.  So the answer is to have several tanks standing on top of each other, fighting for aggro on the boss.

I always found this good fun because it needs the tank corps to be quite coordinated. We run in together. We run out together. We dodge the fires and whirlwinds together. It’s very important that you learn to keep an eye on the other tanks and spot where they are moving.

In the picture above, you can see us standing together at one side of the room. This is (thanks to Moo) where we usually pull from. We’d run in together from here and the rest of the raid would be near the entrance to the room.

Lady Deathwhisper – I enjoy fights where I get to zoom around and pick up loads of adds, and Lady Deathwhisper certainly fits that mould. Not only do we have our own mobs to pick up, but when one of the fanatics becomes deformed (ie. grows huge, hits like a truck, should be kited rather than tanked) we can pingpong them across the room by taunting from other tanks and back again.

Communication is key here. Because the room is large, it helps the raid if we call out when one of our mobs just became empowered or deformed.

Phase two has one of the basic ™ tactics for using multiple tanks. The boss puts a debuff on whoever is top of the threat list. After the debuff has stacked to a certain amount, someone else has to taunt her away until the debuff has fallen off. So you have two tanks who have to pay attention to each other’s debuffs.

Gunship – Rise up, sons of the Horde! (I giggle every time Saurfang says this.)

This one needs two tanks because there are two different locations with tankable mobs. One stays behind to pick up the adds who jump across (picking up the captain as priority because he whirlwinds, I believe) and the other jumps across to the far boat to tank the boss.

So there’s lots of running around to do, lots of target switching, and rocket packs to play with also. This was always going to be a winner.

Note that if you are tanking the boss on the far boat, if you pull him close to the edge then your healers can help heal without having to jump across themselves.

Deathbringer – This is the dullest of the Icecrown fights for melee, since their main goal is to hit the boss and not get hit by the adds. It isn’t a lot more exciting for tanks. Again the debuff mechanic is used which means the main thing to focus on is taunting off the other tank when she gets marked.

I’m looking forwards to seeing the next wing too. How about you? Had a chance to see Icecrown yet?

Quick everyone, on to the gunship!

What could be better than a zeppelin flight? How about … a zeppelin with guns? And jet powered rocket packs?

Obviously you have to sign for the rockets first. Darn these goblins and their military bureaucracy, I guess we’re just lucky that there’s no charge. (I think the future of the Horde may be mired in paperwork.)

But this does leave one question in everyone’s mind. Us bipedal types can carry a rocket pack strapped to our backs. But what happens to the bears? 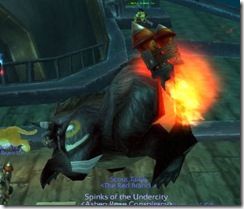