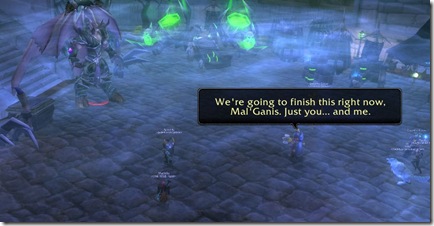 This screenshot is taken at the end of the Culling of Stratholme instance. Arthas, your group’s pet NPC in this timeline, calls out the big boss. Unfortunately, he’s constrained to use the same lines that he used in this encounter in Warcraft III, where he wasn’t accompanied by a party of Azeroth’s finest.

So he says, “We’re going to finish this right now, Mal’Ganis. Just you… and me.” And every single player who has run that instance thinks, “What am I? Chopped liver?” Then he bats at the boss ineffectually while players kill it.

This screenshot is the last boss in the Trial of the Champion 5 man instance. The Black Knight isn’t so much lying outright as suffering from the worst care of delusional thinking in the entire game.

Has anyone not seen this dialogue and thought, “Yes, of course we thought that.”