It’s fantastic to have an MMO which has a single server. All your mates are there. You don’t have to worry about whether your server will end up being under-populated and dead, or whether all the hardcore gank guilds will pick it. You know that all the best guilds will be there, because there isn’t anywhere else.

But recently in WoW, I’m also seeing the advantages of having several servers. When you are tired or worn out on your main character and want a break, you can take a ‘server holiday’. I’m not tired of Spinks, but I am running out of endgame content for her. And rather than burn out or pay to be bored, I’ve been spending more time on alliance alts with friends.

So most of my experience with PUGs recently has been with various alts: the hunter I’m playing with Arbitrary (our duo recently hit Outland, which is the first time she has been there), the inevitable death knight (did anyone mention yet that blood specced tanks are overpowered?), the bank alt that got levelled just because, the lowbie fixed group that I’m playing with friends (ok, no PUG there).

Last week, I decided that I missed my level 80s and ran a few instances on Argent Dawn, just to get back into the spirit of things. My main reactions: 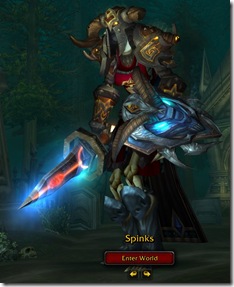 For example, let’s take a random LBRS (lower blackrock spire) group – which for my money is the toughest instance for its level.

We have a wipe, no surprise there. The rogue uses vanish to avoid being killed. As everyone else is running back, he comments that he’s scared about being alone with all those orcs. The tank says, “Don’t worry lilninja (that was his name), I’m coming to save you!”

Can you imagine that in a level 80 PUG? For one thing, as soon as there was a wipe, half the group would disband. If they didn’t, everyone would hurl abuse at the guy who managed to avoid wiping. And the tank would probably curse the healer.

Even the rubbish groups I’ve had at low level haven’t been really aggressively nasty in the way that high level groups can. Here’s another example:

Level 80 PUG, and I’m healing on my druid. I’ve not done any level 80 heroics for a month or so because I was taking a break. The tank is racing through and not waiting for anyone, and he’s taking shortcuts I haven’t seen people use before. I’m no slouch, but I’m remembering my way around. We wipe at one point (yet another stupid pull, and I got some adds because I didn’t realise that they’d skipped a pack on the way down some stairs) and I explain that I haven’t been there in awhile and ask if he could just wait for me to be in range from time to time. Others in the group whisper me and tell me that he’s just being an elitist jerk. He says, “You should have said you were a fucking cripple who couldn’t do your job,” and I leave.

I’m tempted to put it down to people continuing to run the instances long after they’re burned out. Which doesn’t happen so much while levelling.

I love my main

So it all comes down to this. I love my main character, and even after taking a break (apart from weekly raids) I get a kick out of coming back to her. Sometimes absence really does make the heart grow fonder.

But I will look forwards to harder instances in Cataclysm, if only so that they will cut some of the current 5 man players who fancy themselves elitist down to size.