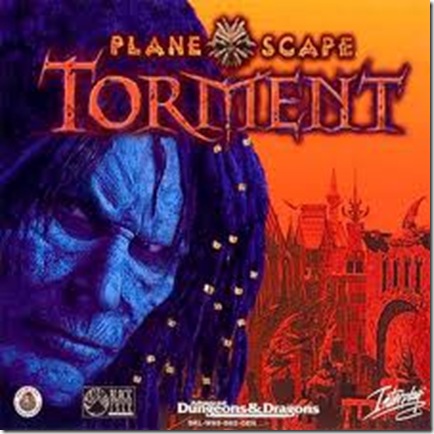 Probably the most cleverly plotted RPG ever made, and with one of the most engaging settings ever written. I don’t think we’ve yet seen its like again.

I enjoy interactive storytelling. From first ventures in playing D&D with my sisters and cousins as a kid, experiments in playing by post, MUDs/MUSHes, more roleplaying games as a student, Freeform LARPs, to computer RPGs, playing by email with IRC interludes, cooperative fanfic, party games like Pantheon and Baron Munchausen, letter-writing games on blogs, and eventually MMOs, it’s been a long strange trip and I’m sure that it isn’t over yet.

I’ve played a few computer games with good storylines (Gabriel Knight, Indiana Jones and the Fate of Atlantis, Diablo II Act II with Tal’Rasha etc comes to mind) but three of them really stand out when I look back. These are, in order:

With Planescape, Black Isle picked the most brilliant and iconic of all the 2nd Ed D&D settings and brought it to life. It is pure fantasy, but it isn’t the standard medieval elves and knights in shining armours. I don’t think there is even a single dragon.

Instead, there is the disturbingly weird magical city of Sigil, a hub between the planes where even gods dare not tread. Any doorway (a category that can include wells, cracks in the wall, etc) could hide a portal to one of the outer planes. Demons and strange elemental beings go to Sigil to rest from their eternal wars. It’s like a fantasy-steampunk London – anything is possible there.

Also, although there have always been fans of D&D artwork (and they have had some fantastic artists working with them), Planescape is the one setting which everyone in the fan community always associated with its brilliant lead artist, Tony DiTerlizzi. You can get a feel for the style here. So it was always a setting with a strong visual identity, and also a strong writing style. Characters had their own slang (it was intended to have a London Cockney feel to it, I think).

So that’s the setting, which is cool in itself. Add in a storyline about the mysterious and amnesiac Nameless One who appears to be immortal, gathers a bevy of fantastic and well-loved allies/ enemies, and explores the setting within the confines of a very tightly written story. And then if that wasn’t enough, explore some of the philosophical implications of what the Nameless One finds out about his past and give him the chance to make some big moral decisions.

What can change the nature of a man, indeed?

But what made the storyline for me was how much I was drawn to care for his allies. I never could bring myself to play through the game as an evil alignment because I just didn’t want to hurt them, and you were given some truly evil ways to torment your allies if you really wanted to do that.

I can’t really talk about Planescape without feeling betrayed by the game industry. After I played through that game, I hoped that just maybe it would be the harbinger of a new age of brilliant interactive storytelling RPGs. But it never happened. Maybe it didn’t sell well enough. Maybe there just wasn’t the demand. Maybe people just wanted WW2 shooters instead. I don’t know. Planescape was the end of an era, not the beginning.

But for all that, if you can get hold of a copy and put up with the 1999 era graphics, it’s one of the best storytelling experiences you’ll ever have with a game.

I’ve been meaning to play Knights of the Old Republic for ages and just never got round to it. (Playing MMOs will tend to do that to you – I see  a game, think ‘I must play that sometime’ then come back to it 3 years later). But I did recently play through it myself, and it was tons of fun.

I’m comparing it to Planescape because the stories have a few similarities. You wake up with no memory. You gather a team of friends around you. You go off on adventures. You find out more about your characters past, which turns out to be fairly important. You are able to play as good or evil or something in between and the moral choices you make will affect how the game plays and the outcome. There are some cool revelations, so no spoilers here. (Although honestly, when you meet someone right at the beginning who says specifically that jedi can erase people’s memories, I don’t see why people get too surprised if this turns out to be the case later.)

You also get to play with the Star Wars setting. Despite being set X thousand years before the films, it turns out that apart from the political setup, not a lot has changed. You’ll get to play with lightsabers, train as a jedi, fly jet-powered swoops, have your own pet droid, and wookie, turn to the dark side, or not, and go to a lot of the planets mentioned in the films.

Unfortunately it just isn’t as good. If Planescape is steak, KOTOR is burger (it’s good burger, mind). If Planescape is ‘Carter Beats the Devil’, KOTOR is ‘something really popular but not so smart or deep’ (I was going to say ‘The Da Vinci Code’ but then I remembered that I hated it and never got past the first page, which is a bit unfair because KOTOR was fun).

Unfortunately the NPCs are extremely bland, which is I suspect what really brings the game down. Planescape had amazing NPCs, and I really cared about them. KOTOR has mostly dull NPCs (apart from the killer robot) and I really didn’t. On the other hand, you as the player do get to be the big damn hero is a very big way.

So like a harlequin romance, KOTOR is pure ego bait. You are the hero. No one else is as interesting or important as you. They all exist merely to stroke your ego, entertain you, or throw themselves under your lightsaber. The romance plotlines are amusing but a bit creepy. I guess I just don’t like the notion that if one can only say the right thing to the NPC at the right time, they’ll fall madly in love with you. And I think it encourages you to relate poorly to the NPCs. You always think of them as puzzles which you can unlock rather than as characters in their own right.

Call me an old romantic but I prefer to subscribe to the theory that if someone is into you, they’ll not mind if you don’t always say exactly the right thing. And vice versa.

But it certainly does stroke the player’s ego to feel that cool and important people from the setting are falling at your feet. BUT I expect that in the fanfic (I haven’t checked but there’s bound to be fanfic) most people prefer to write about the relationships that the developers did not allow. Forbidden fruit, etc.

Oddly, even though the dark/lightside nature of the jedi should lead to some philosophical musings (I mean, if one can switch from light to dark or back again so easily then how strong precisely are jedi in a moral sense?) it never does. The game never once asks ‘what can change the nature of a man’ even though it’s about that even more than Planescape is. It never really answers the question either.

And on another side, the actual game sides of the game are very hit and miss. Some of it is painfully easy. The puzzles aren’t difficult at all. Then some bits are arbitrarily hard (the later swoop races, shooting stuff down in the ebon falcon etc) and you’re given no chance to really practice in advance. I saved my game a lot while I was playing it.

So, good fun game. Recommended, especially if you like Star Wars and fanfic. Probably better storyline than the actual films. Prepare to have your ego stroked.

Final Fantasy is a rather different beast to the games I mentioned above. For a start, it’s a Final Fantasy game with conventions of its own. But what really marks it out as a storytelling game is the relationships you have with your companions.

Auron in particular is one of the coolest and most badass companions in any game ever. And even he has a cool revelation of his own before the game comes to its inevitable end.

And I defy anyone not to feel a pang of … well something … for the little summoner when you realise that she’s going willingly to what may be a fate worse than death.

I really cared about the NPCs in that game, which was what brought the storyline to life.

Well for me it’s clearly Planescape by a country mile. And I realise how much I appreciate a storyteller who can make me care that much about the setting and the other characters in the game while still making it all about me. I loved it so much that I picked up a lot of old boxed sets of the D&D setting, which are very much prized possessions for me even though I never got to play/run it as much as I would have liked.

And going by past history, I rather think I’m more intrigued by FFXIV than by SW:TOR as upcoming MMOs. I know which storytelling team have the track record for me.

If Cryptic stopped futzing around with Neverwinter Nights MMO rumours and just got the Planescape license, I’d drop everything to play it.

Do you have favourite stories in games?