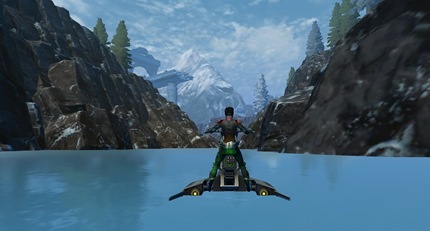 This is a screenshot of my character riding a speeder along a river in Aldaraan, which is a very pretty planet. Because the speeder hovers anyway, there’s no real need to ever swim again once you have one. My trousers aren’t actually green – character classes in SWTOR have strong colour schemes and Sith Warrior is generally black and red.

I’m still having a blast with the game. I got to the end of Act I (each class story is in three acts), had some fairly tight fights and cool scenes, and am now a Sith Lord. Go me! I also have a legacy – which is like a family name. You don’t have to actually use it as a surname, but from now on every time you get xp, you also get legacy xp. I compare it to guild xp in WoW except that we don’t yet know what you’ll be able to get with legacy xp, that’s for a future patch.

I called my Legacy family De’Nevers, after the swashbuckling Duc de Nevers in Le Bossu (if you like swashbuckling films, try to find a copy). I figured if I’m a lightsabre/sword fighter, might as well be related to the best.

I remember vaguely comments from beta that people were concerned that there might not be enough quests to level up with. While this may be an issue on some of the starter planets, after that you’ll largely be rolling in xp. After you have finished the main storylines on a planet, you will open up some extra bonus missions which will usually feature a military quest giver who is in the spaceport. So if you’re pretty sure that you’ve done all the single player non-class quests on a planet, check out the spaceport for the bonus questgiver. Some of the bonus quests are pretty good, but mostly they give good xp and credits/ gold. Other sources of xp/credits are PvP and flashpoints.

I haven’t done a great deal of PvP but the battlegrounds I have seen show clear influence from the WAR devs. They’re interesting locations, with plenty of scenery or buildings to climb up, push people off, and generally PvP around. I have totally failed to figure out Huttball, which is a grab/capture the thingie battleground, because I never quite figured out where the goals were (clearly this is a problem if you do end up holding the ball). One of the others is an Arathi-style “capture and hold these points for X amount of time”, and the other is an attacker/defender setup which resets a few times to give both teams a chance to both attack and defend.

I couldn’t comment on PvP balance at the moment, but there’s no reason why this game couldn’t be as interesting PvP-wise as any best of breed in similar genre. It has a good feel.

Another thing I’m enjoying far too much is playing dress up with my companion/s. While the companions can wear normal gear, quest rewards on each planet will also offer a full set of companion-specific gear, each of which has a different style/ look. Sadly this isn’t orange/ moddable, so you can’t upgrade the stats later. I’m also quite enjoying picking gear for myself, this may be because cut scenes show your character’s face and torso rather more than you would usually see it in MMOs, so you get very aware of what they are wearing.

The patch news this week is that Slicing got an emergency nerf – while people are complaining about this on bboards, I suspect that there may be a later tweak upwards to make it harder to actually lose money on Slicing.

The bboard complaints are not surprising, although it’s interesting to see how many people didn’t see any problems with it. See, a consumer society would be just great if the bank just printed out extra money and gave it to everyone. This would clearly not affect prices, or the willingness of anyone to actually make/do stuff at all. Well.

Truth is, in an MMO, not every crafter enjoys the trading side of the game. Some people are mostly interested in making cool stuff for themselves and their friends – which is something Bioware forgot to figure in. (Maybe they don’t have many crafting nuts in the team.) If Slicing stayed as it was, the people who picked crafting because it was fun (ie. and not as a capitalist moneymaking ploy to bleed the Slicers of their not-very-hard-earned credits) would have ended up being hit very hard. Plus, prices would eventually drift upwards (aside from the crafters who couldn’t be bothered to check the market rate and settled for the default AH prices) and it would become necessary for everyone to have maxed Slicing and be using it all the time if they wanted to actually be able to afford stuff.

The Auction House in SWTOR is far from optimal at the moment. It’s not easy to search unless you know exactly what you want, and the default sales prices are driving me (and presumably other crafters nuts). The default sales price is the price that the system inserts for an item you are selling, you can then edit it manually before placing the item up on the AH for sale. This default price tends to be on the high side for green drops and on the low side for anything else.

So, for example, I know I can sell my implants for upwards of 8k because I’ve done so. But as soon as another crafter is too lazy to check current prices and just sticks some up for the default, that goes down to about 1.2k. I think the default prices prevent the market from finding its own value, which is generally bad for crafters but good for buyers. Although maybe not so good for buyers in the long run because I (and presumably others too) are not going to make things that sell for less than cost.

I never thought I would say this, but this is a game that needs an Auctioneer addon equivalent to help the prices settle and make it easier for crafters to pitch prices at the actual selling rate.

I can’t comment on what the various crafts are like at endgame. But watch out for crafted gear with extra mod/augment slots. Those are produced when a crafter crits, and are likely to be the most desired crafted gear at endgame. I suspect non-critted gear will end up being very cheap because you have to make a few of them until a crit turns up that you can sell for more money  (this is similar to the mastercrafting system in DaoC).

PUGs, as in any game, can be good or bad. I’ve had great experiences with PUGs for heroic/ group quests on planets, people being generally cool, willing to explore, and work together. Flashpoint PUGs can be a different matter.

I ran Esseles (the first republic flashpoint) with a PUG on an alt, and it felt like being dragged back into WoW kicking and screaming. The moment we got into the instance, the rest of the group started whining about “press space to get through conversations faster” (it’s the equivalent of gogogo). Someone complained at me rolling greed on an item I couldn’t use, while later rolling need on something they couldn’t use either.

I told them I hadn’t seen the instance before and was planning to watch the full video. They said that was OK, with a hint that I should have mentioned this previously. Since I don’t really care what random people think of me (although these are randoms on my server), I’m not sweating it. But it wasn’t anywhere near as fun as running the flashpoint with a group of friends/ guildies. I wish people would just chill out, accept that some runs will take a few minutes longer, and not harass people they don’t know to rush through faster. It feels like a WoW plague that is spreading, I hope I’m wrong.

On the other hand, planet chat in Tython (Jedi starting zone) on a RP server was worryingly solemn. People were discussing the meaning of justice, and other ethical issues. I don’t know if it is like that all the time, but it was quite cool, and I’ve never seen a general chat quite like it.

I’ve been playing a fair amount of SWTOR lately, and am unashamedly really enjoying the game. Particular high points so far have been:

If you are wondering where SWTOR puts its screenshots, check two things:

Is Crafting broken in SWTOR?

Here is the current issue with SWTOR crafting: there is one gathering skill that makes money as if it was going out of fashion, with no associated risk. It is Slicing. If you just want to make money and don’t care about making stuff, take Slicing as one of your crew skills and send all your companions off to find lockboxes all of the time. You will eventually make good bank.

It’s not that all the other craft skills are bad. Cybertech and Biochem in particular can make plenty of things that people will buy. I’ve made enough from Biochem (I can sell implants as fast as I can make them, nothing else really sells so far) to buy my speeder training et al so it’s not by any means bad, but you have to work at it. They just probably won’t make as much as you would from Slicing because you have to acquire materials and then take the risk that a) other people won’t buy your stuff from the auction house or b) competition will drive prices down so that you won’t make much of a profit.

Armormech, Synthweaving, Armsmech and Artificing all make plenty of nice gear that is at least as good as anything you will find elsewhere. But there is competition from quest rewards, PvP gear, and drops from flashpoints.

At the end of the day, it’s the lack of risk in Slicing – it’s guaranteed money – which makes it so unbalanced.

It will also be interesting to see the effects of Slicing on the market. There are fewer people crafting to sell on the AH at the moment because the game is new out, and lots of people take gathering skills (incl. Slicing) as they level. But the prices they sell at are set by the Slicers since they have most money to spend on the AH.