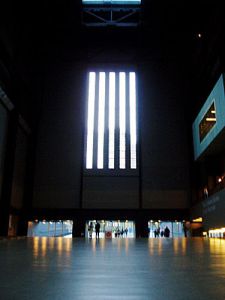 Its difficult to imagine the Turbine Hall at the Tate Modern if you haven’t been there. The space is as vast as a cathedral, dwarfing visitors into insignificance. Great grey concrete wings of walls surround you, cool air vaulting the ceiling, sleek ramps leading down to the floor of the hall or up towards the different galleries.

And in this space, the Tate Modern invites notable modern artists to install something interesting. Something to entertain the masses, because the gallery has become very beloved of Londoners and visitors alike. It’s  free (you only pay to get into some of the special exhibitions) and also it’s not an intimidating museum, reserved only for the art literati. Londoners loved the gigantic metal spider, puzzled at the stacks of giant sugar cubes, and played nicely with the bodyspacemotionthings.

The most recent installation is a giant metal container with one end left open. A metal ramp leads up to it. The inside is so black that when you walk in you cannot see the end. It’s muffled so that sounds don’t echo. So far so good.

But a critic at the Guardian complained that people are interacting with the exhibit wrongly. “Why do we let the public in?,” he wondered. All they do is chatter and treat it like a fairground ride. And he was so sure that this container represented the experience of Jews being sent to concentration camp that the thought of people interacting with it in a WrongBad way really upset him.

“Is the Tate Modern audience ready for a chilling and serious work that invites contemplation of death and dereliction and the Holocaust? Apparently not, if the annoying atmosphere on the first public day of the exhibit was anything to go by.“

But the artist hadn’t said that was the meaning of the piece, even though he’s worked with holocaust imagery previously.

I was reminded of reading long rants in blogs or bboards, complaining that other people were playing MMOs in a WrongBad way. How dare those players roleplay? How dare they minmax? How dare they find things to do in the game that the devs hadn’t planned?

Usually, neither the devs nor the artists are the people making those complaints. Because as long as no one is griefing other players or cheating, they know that all interactions with the game/art are productive. There is no wrong way to play, unless you refuse to engage at all.

When I went to the Tate Modern I found walking into the container far more interesting to experience myself than it looked from the outside. You walk in through the entrance, the velvety darkness folding in around you. People you know turn into dim shadows. But the full impact of the piece only struck me after that when I turned around to leave. Light blazed in gloriously through the container’s entrance. The only reason I hadn’t seen it before was that … I’d been facing the wrong way. If you walked into the dark with a sense of gloom, you walked out with a sense of hope.

Or maybe I was just playing it wrong and having WrongBadFun.

In 1971, an exhibition of modern art at the Tate Gallery in London had to be closed after four days. Visitors had been going berserk, hysterical, screaming. A reporter at the time noted:

Some of the 1,500 visitors became so intoxicated by [the] opportunities that they went around “jumping and screaming” to quote the exhibitions keeper, Mr Michael Compton. They went berserk on the giant see-saws, and they loosened the boards on other exhibits by trampling on them…”

It was the first time that the Tate had hosted a ‘fully interactive’ exhibit. They didn’t do another for awhile. The exhibition has been recreated in the Tate Modern (one of London’s best galleries; if you’re coming here and like art at all, it’s well worth a visit) and this time around, the reception was very different indeed.

When we went last weekend, people were having lots of well-behaved fun with the interactive exhibition (read: adventure playground). They were queuing politely, laughing, and enjoying the heck out of the whole thing. I saw people of different ages playing together, from the Japanese teenagers, to the family helping their tiny daughter onto the balance board, to my husband trying (fruitlessly) to climb up the interior of a bookcase –- no I don’t know why either.

Leaving aside the question of whether an adventure playground becomes art just because you put it in a gallery (to be honest, half the fun of going to a place like the Tate Modern is that you can try to answer that yourself), you have to wonder what changed.

The exhibition was almost identical.

But maybe people these days are more comfortable with the idea of play. It’s one of the ways we approach the world. If you look at a new computer UI you’ll very likely be encouraged to play with it to work out what it does.

And it makes me wonder whether in 30 years time we’ll look back at today’s MMOs and all the associated hijinks with exploiting, griefing, fake identities, elitism etc and think, “Man, they were fun games. But those poor people … they just didn’t know how to play nicely in virtual worlds back then.”