I’m kicking off with a couple of articles that told me a lot about the games they cover and also were (I thought) wildly entertaining reads.

OK, over to you all. Any recommendations for articles that really stayed with you as good examples of what you like to read in gaming journalism?

I have been switching between MMOs at the moment, which gives me an opportunity to muse on truisms that seem to be valid for all guilds, all players, and all MMOs.

Feel free to add any great unwritten laws of MMOs that you have discovered and I’ll add them to the list. 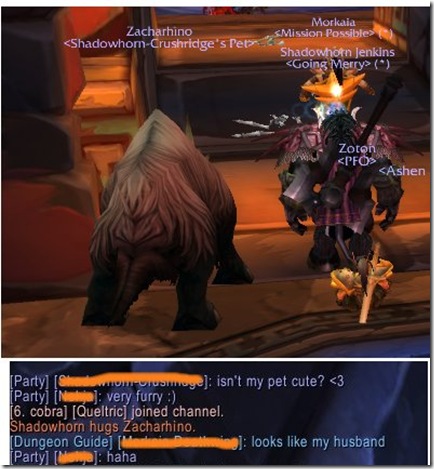 I wasn’t the one who typed that!

In the interests of allowing people to make total tits of themselves, I won’t post up links to any of the bloggy April Fools I’ve found so far until this afternoon. Feel free to suggest good April Fool links in comments.

(Big admission, I was going to write an April Fool about some big game company apologising for not including EU participants in something or other, because we know that never happens. But Bioware actually did that yesterday.)

The Brown team has been buoyed by focus group results suggesting that an outbreak of physical fighting during the campaign, preferably involving bloodshed and broken limbs, could re-engage an electorate increasingly apathetic about politics.

In other election related news, BMW debuts its new Political Roundel Attachment Tag (PRAT) technology. They have some pictures of it on the homepage. (Thanks, Twoo.)

Kotaku is linking gaming related April Fools as they find them here.

TAGN reports on all the official Blizzard April Fools

Tanking Tips has news about a new legendary shield in WoW (about time too!)

Troll Racials are Overpowered has seen the light! He’s starting a new incarnation as a gnome paladin.

wow.com has had a change in direction to become Mass Effect Insider (or Leer at Taylor Lautner Insider?) (note: I will laugh if the Twilight stuff sends their hits through the roof.)

As he says himself:

The typical reaction to falling for a hoax is outrage. I want you to put aside that emotion as much as you are capable of and celebrate another – imagination. If you fell for my story, it is because the seeds I planted fell on the cherished soil of fertile and optimistic dreamworld. This should be something you should be proud of. You have the capability to rise above the mundane and cynical, escape the clay around your boots and float away on boundless escapism. You are a gamer.

Captain Arnath really is the whiniest Argent Crusader, you’d think he’d be happy to help one of our top apothecaries support the war effort but no … whine whine whine …

I guess someone in Blizzard HQ didn’t like him much either. I can only applaud the weekly sacrificial blood elf.

Who knew that benching players could lead to such bursts of undistilled brilliance? One of the hunters in our raid captured his recent loot frustration into a couple of epic video clips. The mood will be familiar to anyone who has ever raided, ever.

And he’s kindly allowed me to link them here. (Warning: Minor swearing, lots of Nazis.) If you like them and are on EU servers, feel free to hop onto Argent Dawn to give some feedback.

Of course, all this creative activity does have a downside. Maybe if we bench him some more, he’ll make more videos ….

He does have a point.

I wonder what a launch officer does?

Oh. Well, I could push a boat out into a river too, I guess.

Wonder how well it pays.

This post marks the end of a long week of posts about WoW and particularly about the new random dungeon finder that came in with patch 3.3. What can I say? It’s been a jolt in the arm for an aging game. It’s been a reminder that the instanced content was always WoW’s strongest selling point. And it’s reminded a lot of people who thought they disliked grouping that what they mostly disliked was all the associated hassle in getting the group together.

The most brilliant thing about the dungeon finder from Blizzard’s point of view is that no one else running current gen games can copy it. In order to work, a tool like this needs a massive user base. For example, I woke up at 2am this morning and tried to get a group on my death knight out of morbid curiousity. 10 minutes later *BAM* smooth as silk Forge of Souls Heroic run. Now think about how many players you need active in order for there to be a 50% chance for any single person to only have to wait 10 mins to get a group at two in the morning.

My new Death Knight who conveniently hit 80 the day before the patch is also looking rather sleek in her new gear, thanks to some lucky drops.

In any case, we’ve all been running a lot more instances, and getting to grip with a lot more PUGs. I feel as though I’ve been in a permanent sugar rush when logged on. And it’s also not all perfect – what’s more, even those of us who are usually paragons of perfection occasionally make (say it in whispers) minor mistakes.

Here’s a list of some of the dumb things I have done this week:

By the way, every single one of those runs was actually successful (except for the Loken one because my friends logged on and I left the group). The only one that even caused a wipe was when I fell off Forge of Souls, because I was tanking at the time.

The oddest complaint I have had from another player was that I killed the bosses in the Nexus in the ‘wrong order.’ I told him I hadn’t received that memo.

I’m not the only person who has been cataloguing personal PUG failures (aka “I was THAT guy.”)

And my wtf of the week is wow.com’s post this morning about paladins which notes:

paladins are forced to pay the hybrid tax three times over — because they can do it all without limiting themselves, they can’t do anything as well as other classes

Does anyone seriously think that paladins can’t heal or tank as well as other classes (hint: they’re probably ahead on both right now).? Or that their dps is way behind … e.g. warriors? It’s not. Everyone whines, but that was a silly thing to say with any editorial weight behind it.

Also, I’ve seen a lot of rather tedious tank and healer questionnaires going around? Who the hell cares what your favourite spell is? *facepalm* It’s the whole package you should be looking at and how they fit together.

But for the record, my favourite tank type to team up with are bears. Warrior/druid is just a nice combo with a lot of finesse, I find. Or maybe I just know good bear tanks.